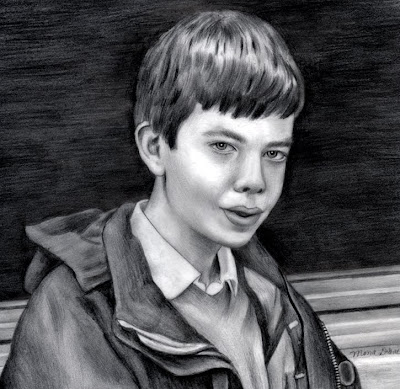 "Eric," 8 1/2" x 8", small work, final version of the pencil portrait of my nephew Eric
Although my initial drawing made a nice study of Eric himself, I wanted to spend some time on the clothing, but more specifically on the background of this drawing so it is clear to the viewer that Eric is on the subway. The reason is that Eric has loved trains and all things 'train' since the age of 3. He knows the NYC commuter and subway lines inside out (better than Aunt Mona who is a New Yorker of many years), as well as many other train networks around the world as a result of his enjoyment of trains. So of course he knew right away that this was drawn from a photo of him on his last birthday, while riding the "E" train!
Posted by Mona Diane Conner at 2:59 PM

This turned out really well, Mona. Lucky Eric! My grandson also loves trains- I think that was his first word!!!

Very good!! Makes me want to grab a pencil and go for it!! Good values on this one.
Jim

I thought it was finished before Mona, it looked fabulous even then. But, it looks perfect now and I can tell Eric is thrilled with it.

This is fantastic!! What a great birthday present for Eric! 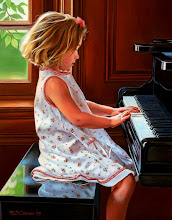